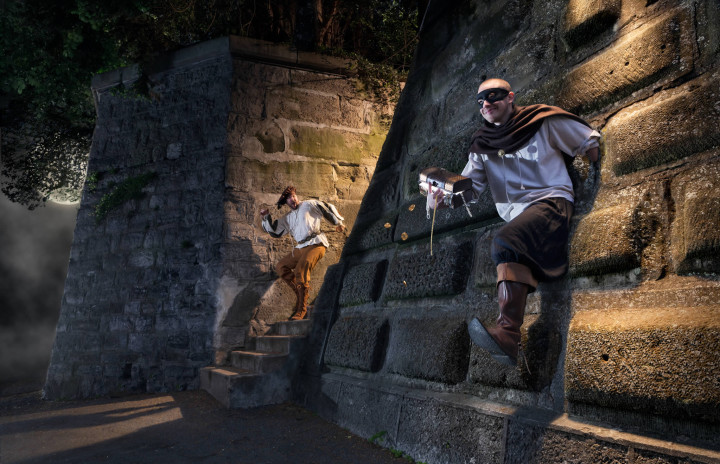 “Le Passe-Muraille” is the first of hopefully many collaborative projects with Geneva-based photo designer Sebastien Braito.

The “man who can walk through walls” is a mythical figure in many cultures, sometimes the hero, sometimes the stuff of nightmares. The thief in this picture makes use of this special talent freely to relief those who live plentiful of their valuables. However he’s gotten so careless and daring with his heist, that he’s managed to almost get caught by the angry rich owner.

This photo was shot in about 8 different layers, keeping the camera steady on a tripod. Like this we were able to focus on lighting a specific area of the shot. We used a Elinchrom Ranger RX as CTB (moon) light fitted with a standard 21cm reflector bowl and positioned 15 m from the scene. This would give us even blue moon lighting on the set. The thief was lit from above with a speed light in a beauty dish and a full CTO filter in place. This beauty dish was on a manfrotto boom at about 4 m overhead. The angry owner was lit from behind with an Enlichrom Ranger RX and a full CTO. Because we had only one Ranger RX, for this shot the blue light was produced temporarily by a beauty dish in front. So all in all, we used rather hard light – no softboxes, no umbrellas, no larger beauty dishes, just a 40 cm diameter one. We also brought a smoke machine which is partially visible in the lefthand corner. The shot of the moon was kindly provided by Sébastien from a separate shoot of his. All postproduction was done in Photoshop CS6. 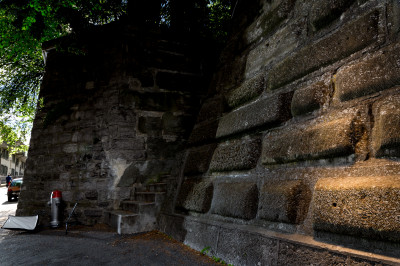 Since we two live in two different cities – Zurich and Geneva. We decided to do two different edits, each his own version. And then learn from each other. Seeing Sébastien’s version, I loved his idea of adding the moon in the photo and followed his detailed instructions to do so. Awesome way to learn from each other! Here is the link to his edit: https://www.flickr.com/photos/hathelion/8782308143/in/pool-swiss-strobist