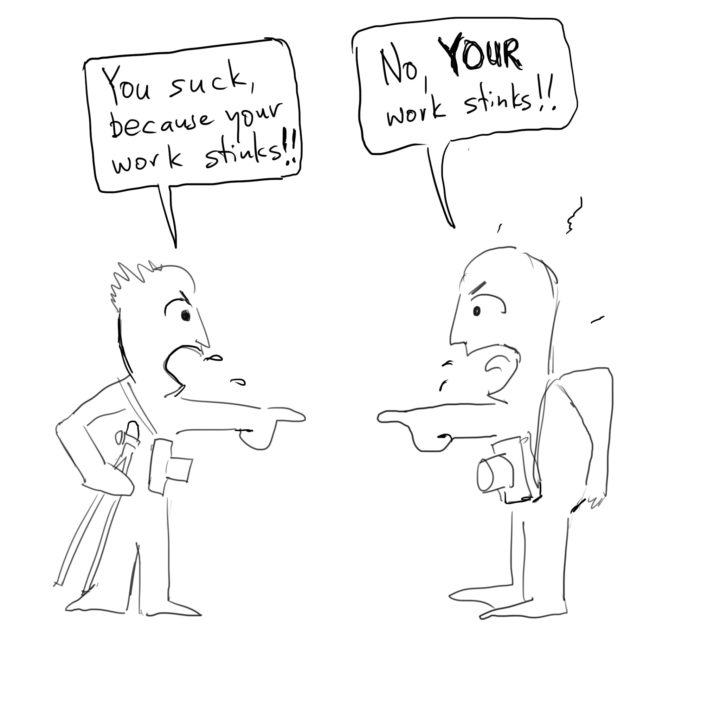 Today I’d like to approach a difficult subject. A subject that is by no means unique to photography, but has as much to do with who we are as human beings and how we handle frustration, critique, unfairness and our perceived self-worth.

Have you ever witnessed a conversation between two photographers? Can you detect a pattern in these conversations? Two caring human beings, exchanging ideas, sharing the passion for photography, asking each other questions and learning from each other. Right? Nope. THAT never happens. Instead, in almost all the cases, it’s two puffed-up know-it-alls bragging about the size of their own penises – figuratively speaking, well, mostly figuratively.

Oh but that’s normal, you might say, it’s a male dominance thingy. Two males have to battle it out to see who has the bigger nut sack and because they’re not in Kindergarten anymore, they have to assert their dominance in a non-violent manner. Okay, but… that doesn’t freaking make it a grownup thing to do!!! Geez. Even if it’s just verbal, it’s petty, vindictive and self-glorifying.

I don’t think dominance rituals are the only reason. Not by far. I think it has to do with the ways we grow as photographers. At first, we grow fast and the process of learning is glorious! We discover new techniques, new gadgets, recipes we can follow (easily). And within a very short time, we feel we’ve become artists. We feel we have finally discovered that we obviously have talent in something. We must have! All our friends are loving our new photos! We get a bigger camera, we get some flashes, we binge-watch tutorials. And we feel we explode with potential. We start to get jobs and suddenly we are kind of professional photographers in a way, right?

But then something terrible happens. The worst thing that could happen to a human being on a roll. We reach a plateau. Suddenly we can’t watch another tutorial that will teach us many new exciting things because we already know all of them (or most). Every new project isn’t simply “that much better” than the previous one. We start to browse for new stuff to feed our lust for growth, but we can’t find anything good! Suddenly we have to almost drag ourselves out the door to go shooting. But we have to, after all, we have undeniable talent. We just kind of hit a dry spot, right? What we don’t know is that we haven’t hit a dry spot, we’ve reached THE PLATEAU. Every photographer eventually gets there and it sucks to arrive there!

Once of a sudden things get harder. Every step up the mountain is much more effort. What’s even worse, sometimes we slip and fall down that mountain again. Suddenly, the best image we’ve ever made was a couple of years ago. And all the new stuff is kind of meh and we know it.

For a lot of plateau’d photographers the financial pressure isn’t helping either. They decided to quit their jobs to become full-time photographers in the full swing of their rapid ascent up that mountain. There was no doubt in their mind, that this is what and who they want to be the rest of their lives. But with the abrupt arrival on the plateau, thoughts start bouncing around like on a pool table. The money is sparse, clients are a pain, life is shitty, equipment is too expensive, but most of all, every other photographer is an untalented scumbag and they should be made aware of it. And he has more likes than me too. “Sad. So sad.”

There are two possibilities if you reach the plateau. Either, you swallow your pride and continue the steep climb, step by step. Or, much simpler, you lash out on everyone else. Someone bellow the plateau? They have no idea how hard it is, don’t they! You hate them for their ignorance! People on the plateau? You hate them too, they are just vindictive, smug a-holes who haven’t done anything original recently but think of themselves as the bee’s knees! People above the plateau? You hate them most of all, because they make bold choices that you think are economically totally unreasonable. Why waste all that time doing this unique thing nobody is interested in! Anyway, they are certainly not better than you, because you’ve seen other photographers doing a remotely similar thing to their work – so it’s derivative and horrible, and so are they.

How many times have you heard someone say online “Well, I looked at your homepage and none of your work is original!” As if that was an actual argument. Everybody who EVER looked at someones homepage whom they disliked found something to pick on. And weirdly enough everyone throwing that first stone is then totally suprised when the attack backlashes at them.

I plateau’d too of course and I hated it just as much. But I was also lucky. I got to know some guys who have totally different approaches then mine and they led me to try out new exciting stuff and my journey could continue. But every once in a while I feel the need to show my teeth, let others know how good I am (even though I am constantly full of doubts). I’m not proud of it.

Last year, in an attempt to find out more about the conversational habits of photographers, I decided do an experiment the next time I’d meet a photographer. I’d go to meet them and intently not say a single thing about my own work without their asking. I’d ask questions about them and show interest, but not talk about myself. I tried this on three different occasions with three different photographers. And none of them asked a single question during the whole conversation. They did know that I’m a photographer, but they showed zero interest in what I do but instead where delighted to talk about themselves exclusively. If any of you three read this, don’t feel bad, you were part of an experiment and I’m by no means suprised that things went down that way…

So. What’s the point of all this then? Is there anything we can take from this rant? Other then we are all terrible, greedy, self-glorifying human beings? Yes there is! Because we don’t actually have to be all of that. Here are some steps you can take to bring back kindness to the world of photography again.

That’s it for now. Hope you enjoyed my rant. Feel free to share your own experiences and thoughts in the comments bellow. Just, you know, don’t be a scumbag about it 😉