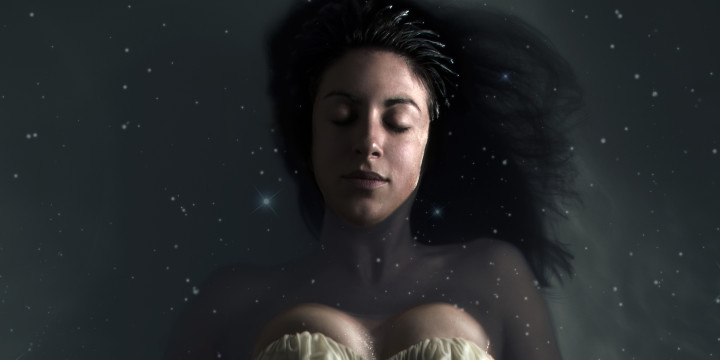 A collaborative conceptual project by John Flury and Ethan Oelman

I’ve been friends with Ethan for a while now. He is a full-time professional photographer working in Zurich and we’ve had several exchanges in the past and complement each other really well. The concept for this project came to him while relaxing in Zurich’s Float Center (float-schweiz.ch). This is a new style of wellness, where visitors are floating in warm water that’s enriched with salt in almost complete darkness for a full hour. The sensory deprivation and sense of weightlessness really helps to relax and let the mind wander in a almost astronaut-in-space-like experience. Thus the idea with the stars reflecting in the water was born.

The artistic and technical challenges

Now that we had a clear idea, we had to determine the challenges. First of all, big strobes where out of the question for two reasons, first of all, it’s simply to dangerous to use them near water and secondly, there was not enough space on either side of the pool to place them on light stands. So we had to fall back to a sort of hand-held lighting with speedlights, maybe with softboxes to keep it nice and soft? Then the second problem became apparent, the water pool was very shallow, only about 30 cm deep. So lighting the model would also light the bottom of the basin (which was white). In order to add stars we needed a DARK background however. Any type of larger and softer light would spill too much on the bottom of the basin. One idea was to bounce the flash off the walls immediately adjacent to the pool. But as Ethan pointed out, this would definitely create a lot of light spill and make things worse. Then we remembered a trick we saw in a video of Karl Taylor and Urs Recher. Urs used a small pico light attached to a powerpack that pulsed very subtle amounts of light about twice a second – a sort of flash painting. I tried this out in my studio with a prop from a previous shoot and the result was simply amazing. 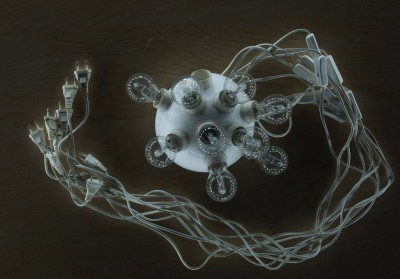 The last challenge was how to shoot top-down. We used a boom for that with a ball head attached to the front on which we could safely fix the camera. The next problem was a problem caused by our decision to use flash painting. Since the camera shutter would be open for 20 seconds – ANY movement of the model would lead to … well… see for yourself :). 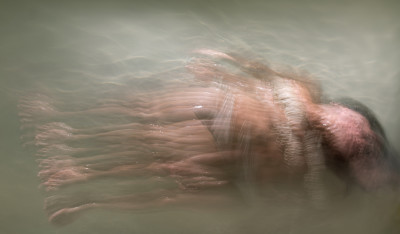 In the first couple of tests, we had the model hold on to some extrusions in the basin’s wall. This worked fairly well, but it was a) uncomfortable for her and b) brought her arms and hands in positions that didn’t look very relaxed. Ethan suggested he’d steady the models arm and legs while sitting at the edge of the pool. Great idea! Finally Romina was able to float in a position that looked relaxed, while staying in the same spot while I was flash painting. There still were some very slight movements, but these actually add a painterly quality to the image.

The last problem, which I think we thought would be much worse was the combination of low ceiling, high humidity and salt concentration in the water. We expected the camera lens to fog up, so immediately when entering the location we took the camera out of the bag and let it warm up to the rooms temperature and humidity. 15 mins later, the camera didn’t react anymore to the moisture. With the camera on the boom, we double and triple checked every crank and handle, to make 100% sure that everything was locked down. The safety of our model first (and gear second) was paramount. Towels were ready too, because anything that got wet would build a saline crust within minutes.

The camera was released from the tethered laptop in order to avoid camera shake. The camera itself was set to mirror lock-up. The shutter was up for 20 s. During this time I was able to reach along the wall of the basin and hold the speedlight down to water level point it towards the model, activating the strobo mode (2 Hz, 1/128th power) and gliding over the water surface with the speedlight, painting her side continuously. A gobo taped to the bottom of the flash, not only protected the speedlight from the saltwater (yikes!), but also controlled the light spill towards the bottom of the pool. The amazing thing to me is, that eventhough we shoot at ISO 100 and F/10 the flash was powerful enough at 1/128th power, simply because the light would aggregate on her skin due to the multiple flash pops (in total probably around 16-20). 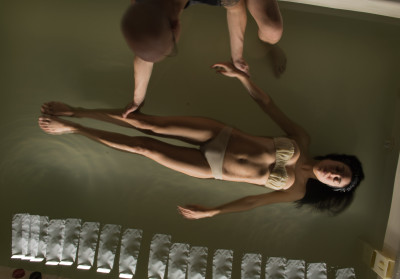 For the model’s face we wanted to make sure we had a sharp exposure, so we used a small handheld beauty dish (with diffusion cloth and grid) and a styrofoam reflector on the opposite side to take a separate exposure. 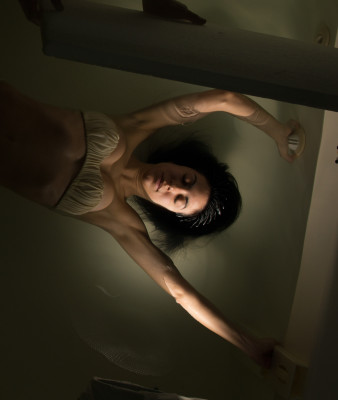 The hour of shooting time we had available left us with around 20 shots. We selected the hero shot and used some details from other shots like lighting effects from the flash hitting the water. This composite was done separately and saved into as a Smart Object from which I’d continue to process the image. 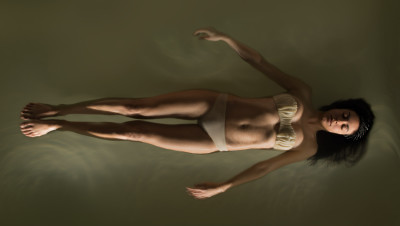 Next up. Color and contrast. My favorite part. Here the look of the final image is defined. The goal was to create an impression of moon light, with the water shimmering in a blue greenish tint. I added three low opacity solid color layers in blending mode “Hue”, one for the water and two for the body. The two body hues were split using the blend-if controls, so I could separately color the highlights and the shadows.  A global curves adjustment helped to darken the shadows in the background.

Looking good, but missing something, a sort of visual counter-balance to the water ripple effects in the lower left. So I created a separate ripple effect in Photoshop using the ZigZag filter. 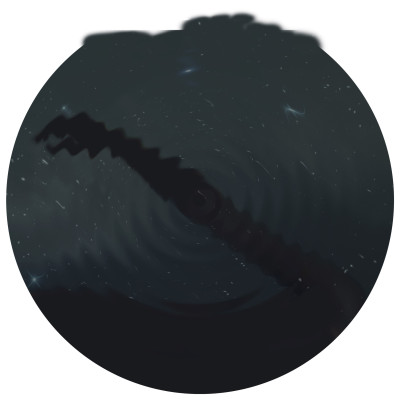 The last step was adding the stars. I tried adding some of my own night sky shots, but was never satisfied. So in the end, I painted the stars using brushes and individual bright dots. 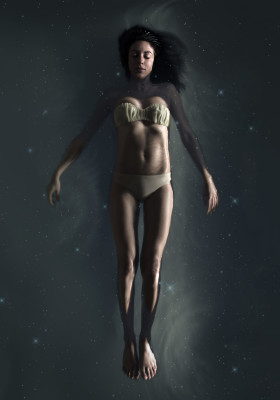 Shot and edited Dec 17th, 2014. This image is copyright protected © 2014 by Ethan Oelman and John Flury and may not be used in any for without written permission.