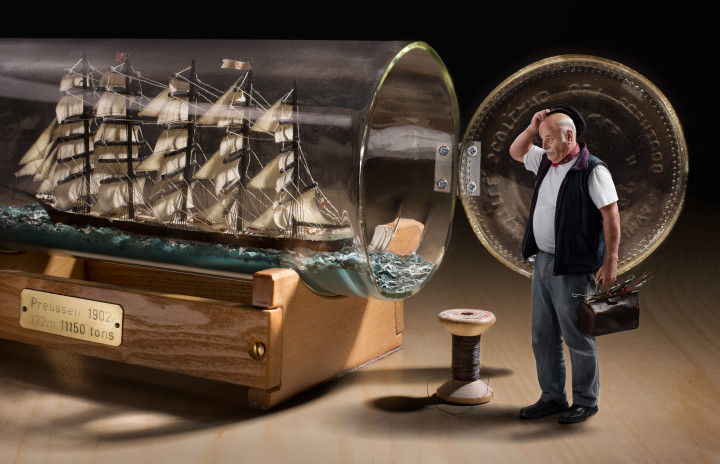 Ever wondered how they do it? How it is possible to build a ship inside a glass bottle?  Before I met Heiri, I though that first of all you have to be a person with very nimble fingers and long tools that fit into the bottle neck and construct the ship inside, plank by plank. But the dexterity needed for such a job borderlines on magic! Maybe it WOULD be easier to just shrink oneself and work on the ship by crawling inside the bottle itself…

I have been searching for a long time to find a “Buddelschiffebauer” in Switzerland (a builder of ships in bottles). Sadly, it seems to be a dying art and craft. It was only while asking around in different model ship clubs and boat clubs when finally I got a contact. His name is Heiri and luck would have it he lived near lake Zurich as well. Heiri is meanwhile retired but has been building ships in bottles for decades and has during that time managed to fill up an entire room at home with his beautiful creations. He was most kind to me and explained the technique in great detail. It’s so simle, that I was laughing not to have thought of it myself. The ship itself is being built outside of the bottle. The masts are on a tiny little hinge so everything can be collapsed when inserting the finished ship into the bottle. The masts are then pulled up by little threads which are then glued down and the extra string is cut off. He has a lot of speciality tools, most of them handmade by himself. You can see a couple of them in the little brown bag in the photo.

We had a great time in the studio while shooting the photos for this project. Heiri is a very funny, relaxed and witty character. He came up with a lot of facial expressions himself once I told him what I wanted. It was really a treat working with him.

With this photo being a photomontage of different sized objects, there are a few rules to follow. Some of which I’ve mentioned in my blog post How To Create Oversized Objects For Photo Manipulation Using Camera Shift. As with the greenscreen in motion pictures, it’s a good idea to give the greenscreen actor something to interact with that translates to the environment that will replace the greenscreen in post. Without such a point of reference, the actor really is in a vacuum and feels awkward, unnatural and has no reference for size and position of the objects in his environment. In the project “Deliverance of the Luminous People”, I outlined the frame of the lamp the elves would later be in with a measuring tape, so if their feet would be outside the physical boundary of their convined space, they would know and could adjust accordingly. In “How To Build A Ship In A Bottle” I referenced the thread spool from the miniature environment with box in the studio shot with Heiri. The box was also an anchor point for me to shift my camera accordingly. We calculated the size of the entry to the bottle and showed him about where that entry would be relative to the box. This worked great! 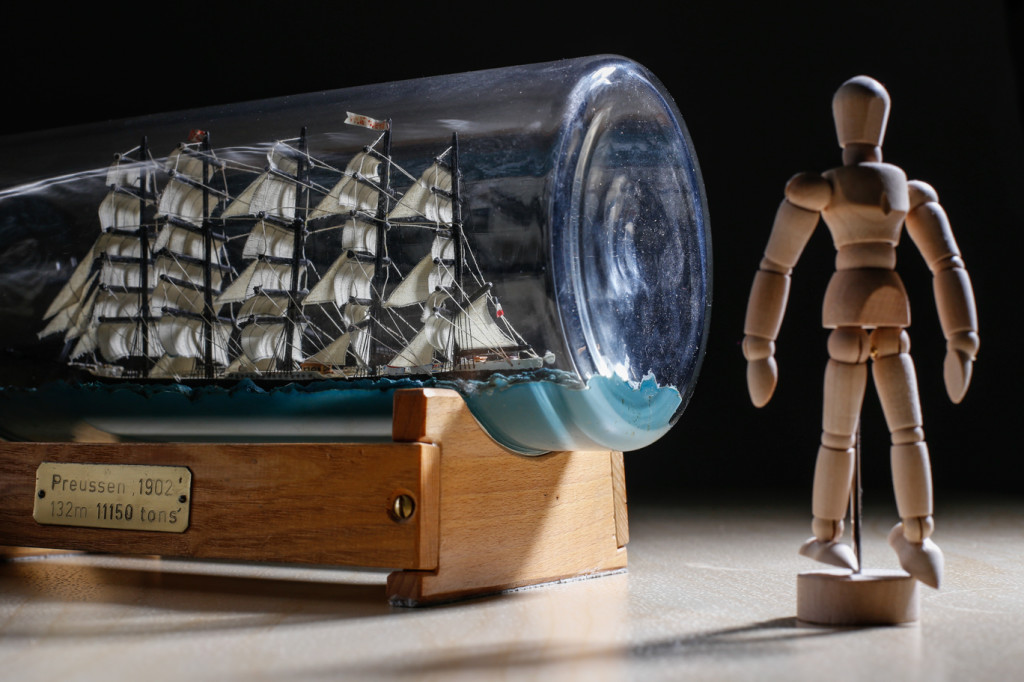 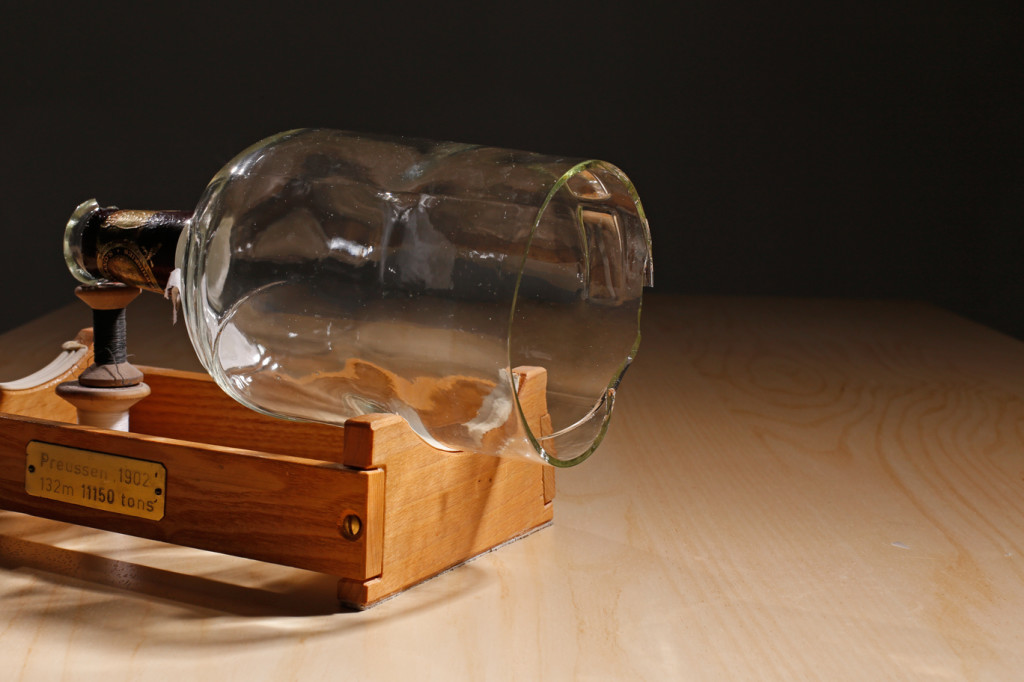 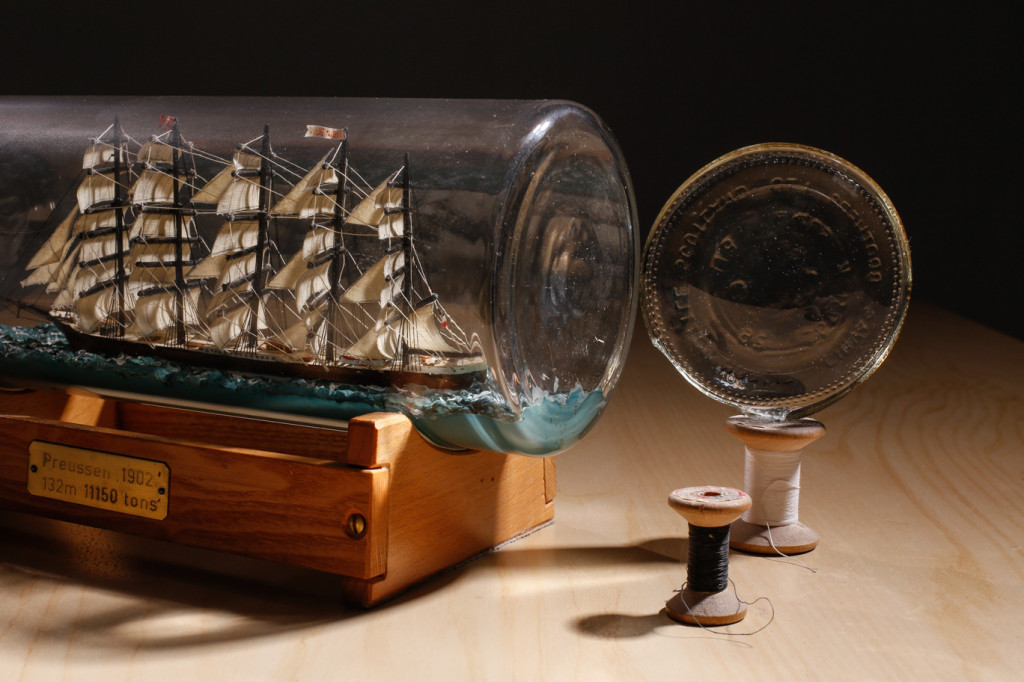 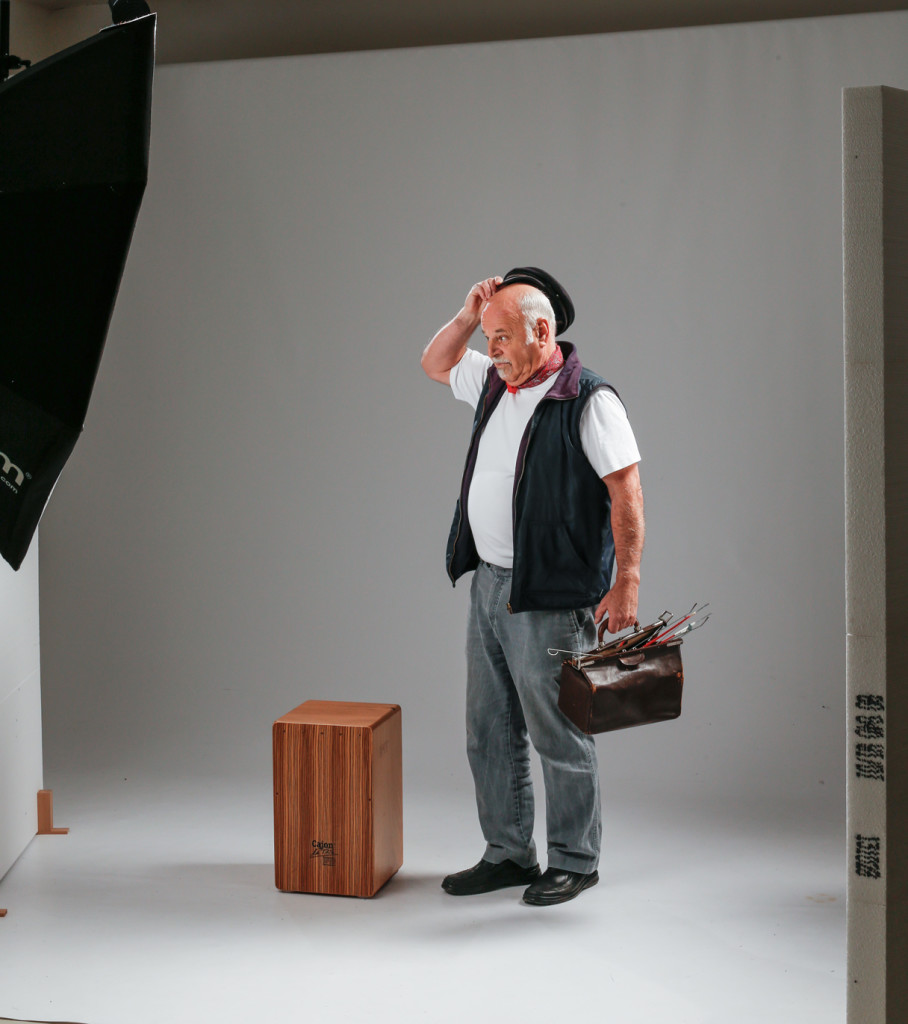 I want to thank Heiri very much for his passion and enthusiasm to do this project with me.

Here is the full-size version of this photo.