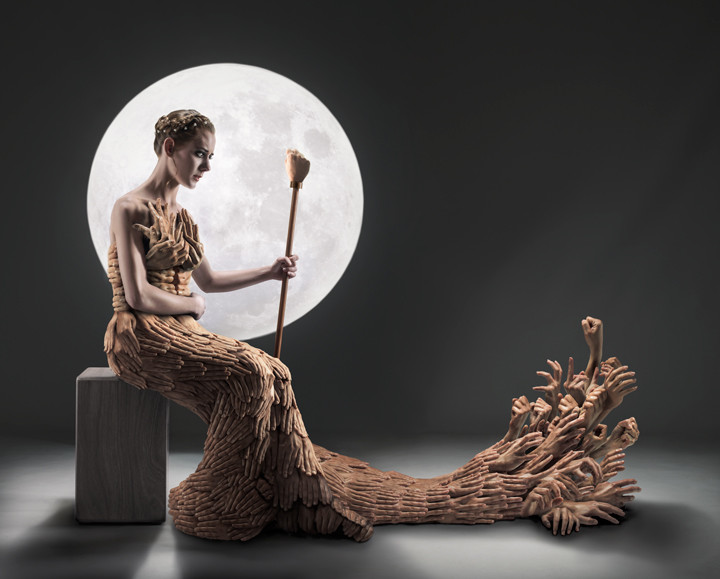 A dress made out of hands

Probably one of my most extensive (if not excessive) projects ever attempted:

As with my previous works I am working on my body of works that explore the realm of stories and tales. It’s sometimes difficult to explain, what it actually is that I’m pushing for. Not because it’s complicated, but because the words storytelling have a different connotation in photography. People don’t expect for there to be an ACTUAL story, but more like a concept of a story. I’d like to go deeper, much deeper. I’d like to tell not just concepts of stories, but the stories themselves and if possible doing so with a single image.

So what’s the story with “Provincial Uprising”? Before you read on, I’d like to ask you to look at it for a while and try to read/see the story yourself. My dilemma is this: The photo SHOULD work on its own, without any explanation, don’t you agree? But on the other hand, viewers aren’t used to going further then the concept, they don’t expect for there to be an actual story behind (as explained above). So not only am I walking on new ground, the viewers are as well if they choose to go there.

“How is it, that a monarch can maintain his power? It’s either by building trust or, far more commonly, by fear. Fear instilled into the loyal subjects that their lives are in danger if they don’t fulfil their duty to the man or woman in power. It seems absurd but their duty is mostly to protect the person who instills this fear, the person who manipulates and subjugates them. Looking at it from a distance, it becomes apparent that it’s all a big house of cards. If one card falls, the rest will surely crumble as well. The queen in this photo stares in horror at the uprising in the border reagions of her realm. Those aren’t just peasants that won’t pay taxes. They are her protective layer and if she fails to put pressure on them, her power and body will be torn appart by the very people who protected and shielded her. Such is the nature of power by fear – it’s only as strong as the pressure put on the people, pressure that bottles up as anger inside these people, requiring even more pressure to keep them in their place.