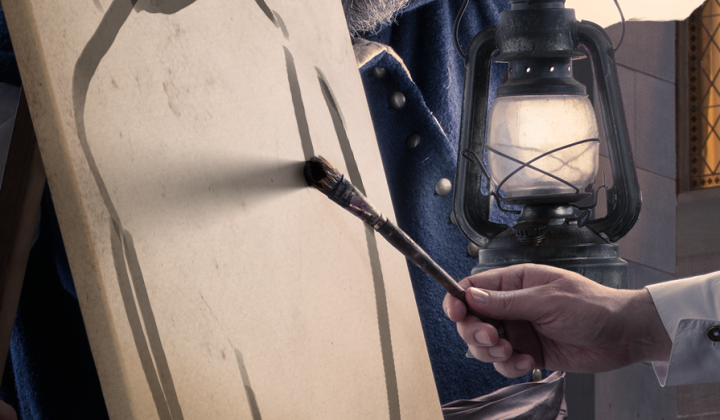 What you are going to learn here today

In this short article you are going to learn two things about photorealistic shadows:

b) how to create 100% photorealistic shadows in Photoshop for one specific (but common!) lighting situation.

The specific situation we are going to solve has the following four prerequisites:

a more or less straight object standing on …

The light source itself is held close to the plane of the flat surface, so that the shadow is elongated. Like the sun close the horizon.

As you will see, even these trivial prerequisites already pose quite the challenge. But with the necessary know-how and technique, you’ll able to create completely photorealistic shadows as well.

Why is it so difficult to reproduce photorealistic shadows in Photoshop?

So you see, there’s a lot to consider. For now though, let’s stick to our simple four prerequisites. Don’t worry, the caveats section at the end will hopefully answer some of your further questions.

Original image (no shadow yet) 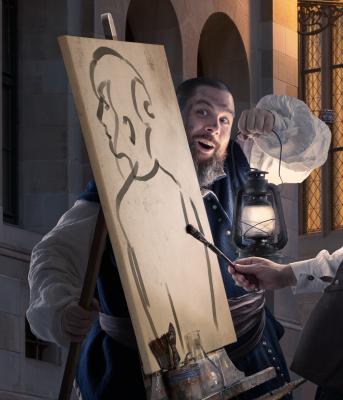 This image is part of my image “Paparazzi – In the Pre-Camera Age”. You can see our four prerequisites: the lantern (soft light source), the brush (shadow caster) and the canvas (shadow receiver), flat angle of attack (= potentially elongated shadows). Even though the lantern isn’t necessarily a huge light source, its proximity to the shadow caster will create a fairly soft shadow on the canvas, what will become even softer with distance. Here is why. 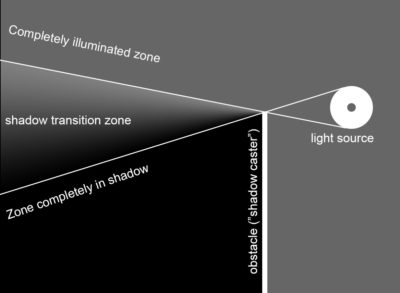 Because our shadow caster has two separate shadow borders (the upper edge of the brush and the lower edge). We will have to deal with two separate shadow transition zones overlapping each other. This overlap will be solved using the blending mode “linear burn” (which you probably never use, right?). Let’s start by drawing some helper lines – using the upper and lower edges of the light source (as seen from the point of the brush) as well as the upper and lower edges of the brush. Make sure you do this on a separate layer, because we’re going to delete it after completion.

How to create a shadow (triangle) that becomes softer with distance?

Create a rectangular selection with your selection tool inside an empty new layer. Use the gradient tool (G) to create a gradient from white to black. For now, white will be your shadow and black your light. You’ll see in a minute, why. Tipp: Make sure, the “dithering” option is activated to avoid banding issues. 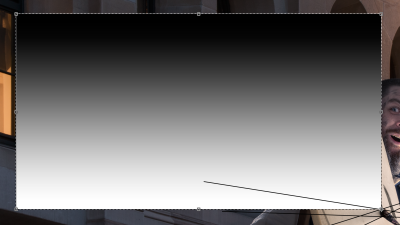 Using the menu command “Edit – Transform – Distort”, reshape your rectangular shape into a wedge shape by collapsing the two right-hand points. While still in transform mode, rotate and align your triangle:

Do the same thing, for the lower shadow border (make sure your transition is inverted this time). After your transformation step, your result should look like this.

Also clip the two shadow triangles onto a white solid color layer, this will make the next step easier.

Set the blending mode of the two layers holding the shadow triangles to “linear burn”. 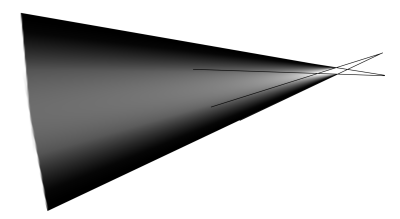 merge both layers into a single layer and use the polygonal lasso tool to fill everything outside the two triangles with black.

the overall shape and softness of the shadow is now pretty much what we’re looking for. The problem with this shadow shape is however, that it only describes the effect of direct lighting from the light source itself. This is not realistic however. With more distance from the shadow caster, other surfaces will start to fill in this transition zone and lighten it up. So we need to fade out the effect towards the left. And we will do so by first turning our shadow shape into a mask (“shadow mask”) and then using that mask to draw the actual shadow using the gradient tool.

Paint the shadow using a shadow mask and the gradient tool

Switch off all channels that are NOT part of your current shadow shape. Go to channels and CMD-click (Windows: CTRL-click) on one of the RGB channels to create a selection. It will look like this…

Back to your layer view. Turn the visibility on for all layers except the shadow shape. Create a new empty layer on top. Use your gradient tool (“black to transparent”, opacity 50%, “Radial Gradient” mode). And drag your shadow shape from the point where the brush touches the canvas towards the left. 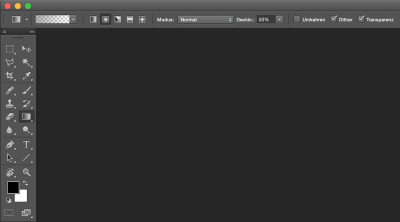 This looks already pretty good, right? Only one last step on our journey towards photorealistic shadows. All we need now is a little bit of that ambient occlusion shadow.

Create another new layer on top – just to be safe. With your selection from before still in place, brush in a tiny amount of black with a soft black brush (low opacity or low flow). 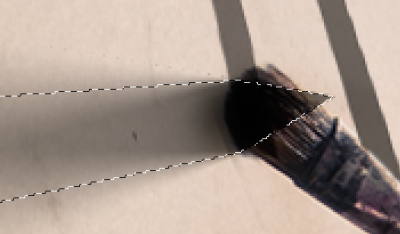 Don’t worry if you paint that ambient occlusion shadow on top of shadow caster (the actual brush in the image). Simply use your layer mask afterwards to mask out that portion. 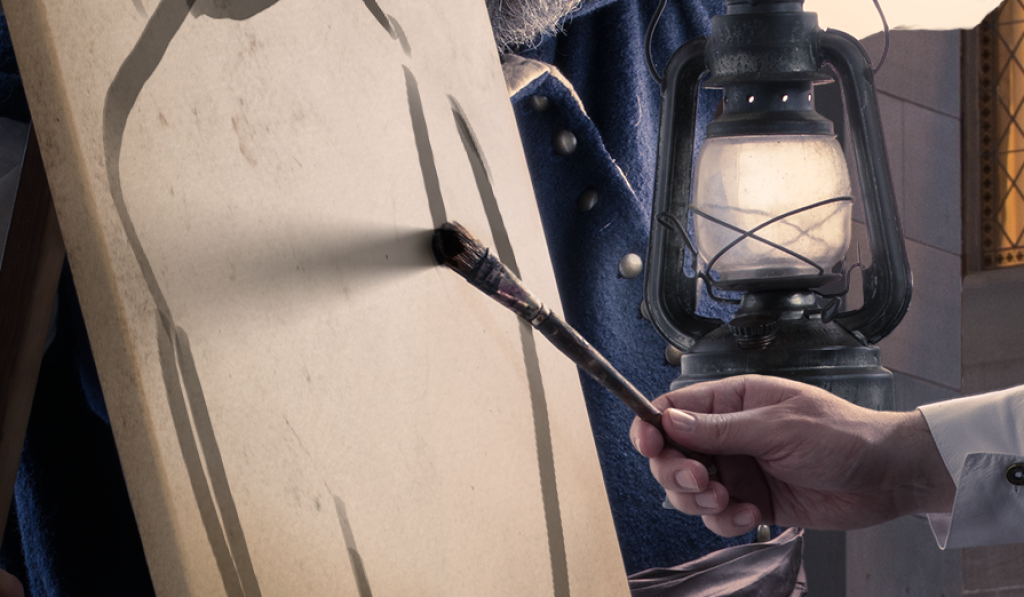 I mentioned that this isn’t a one-size-fits-all solution to creating photorealistic shadows. Here are some additional challenges and how you might get around them.

What about the shape of the shadow caster?

Yes, you are right. We completely took the shape of the shadow caster (the brush) out of the equation, because the angle of attack from the light source was so low, that the actual shape of the brush has been rendered irrelevant with regard to the shape of the shadow. However, if your light sources is further away from the plane of the shadow receiver (here, the canvas). Then of course the shadow’s shape will reflect that of the shadow caster! And you guessed it, now it really gets complicated. What you could try is to adapt to this form in the stage where you transform the (originally rectangular) gradient into a triangle form. Distort won’t help here, you’re going to have to use the “warp” mode. For really complex shapes, I don’t use the method above – but I think of how light is able to enter specific areas behind the object and slowly build up the shadows manually with a soft, low-opacity brush.

What about multiple light sources? Some even with different colours?

Try to focus on the main light source, i.e. the light source that will be brightest from viewpoint of the shadow. If there are other lights, brighten up that shadow accordingly afterwards. If your light sources have different colors, things will get exceedingly complex and frustrating.

What about uneven surfaces, uneven light source shapes, what about…?

Probably my most solid advice on creating shadows is this one:

If you can’t fake it, make it!

Whenever you have the possibility to create a shadow or shadow area photographically, then you should do it. That’s how we did our image Le-Passe-Muraille! It’s actually not as difficult. You just have to think about the areas in shadow. How would the light be able to reach them? Maybe you create a separate exposure only for this area of the image. Or maybe you purposefully shoot on a neutral white or grey so that use the natural shadow or at least have a good visual template to recreate it using Photoshop brushes.